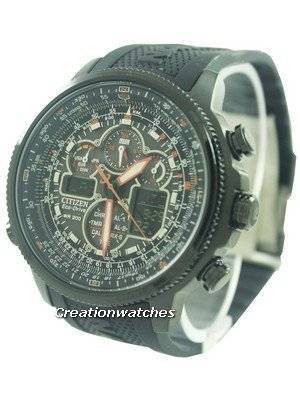 Upon first glance, it was like – “Oh man! It’s definitely a great looking piece!”

Upon wearing, it was zealotry.

The 48mm of stainless steel under the black PVD (it’s sort of ion-plating; we’ll get to that later) has one helluva stealthy visuals (my only gripe is the Navihawk written on the case side in white; glossy black is better. Citizen should have followed the same format as on its band; bold, dominant but only when you want it to) and the thin, crimped bezel has a lot to do with that; it seems. The thing has the perfect flow in it with respect to the rest of the watch.

I, somehow, find mineral crystals a better match for multifunctional tool watches; sapphires are for dressy evenings under chandeliers. I’m certainly not going to wear something this heavy on functionality under such circumstances; I don’t need to be radio-accurate (the A-T in the name says that; atomic time) while relaxing.

Speaking of relaxation, it was refreshing to learn all of the eight different modes that operate the entire watch. To select, just pull the crown to one click and turn until you place the mode marker (at 6 o’clock) where you desire. The best part is the radio-controlled updates need no user input. Signals are obviously stronger outdoors; it often misses them when kept under lock and key. It, however; does fine when an open window is near; for on-demand sync, take it to the RX-S mode and push the crown in.

Choosing other modes is also done the same way; move the selector hand to TMR (99 minute countdown timer) or view the calendar in CAL mode; for the 1/100th-of-a-second chronograph, choose CHR while The WT-S will help adjusting the world time (digital display; on the right) manually. The remaining two 2 are for setting 2 separate alarms.

Setting the main time zones is easy; the left LCD indicates the city for which, the analog hands are set (TIME mode; the upper/lower right buttons select from 43 cities in different time zones). With the UTC display, a 3rd time zone can be displayed.

Apart from the backlight, the Navihawk has plenty luminescence on the hands and indexes, so I don’t need to pull out my cellphone to tell time between a movie. And the slide rule bezel is a big relief from pulling out a calculator every time. But you must know how to do the math. It’s for pilots, but also a big help in long motorcycle rides.

On full charge, the watch will run for 6 months and in sleep mode, it’s 40 months. That’s incredibly cool; something without which, it wouldn’t be such an extremely functional flieger.