Pan-Europ: In memory of the integration

Between 1964 and 1977, there occurred some phenomenal shifts. These 13 years radiated a different charm; way different than what the society then – as a whole –considered cool. Iconoclasts deeply immersed in hedonism then were most often pretty talented souls exhibiting creative genius. Some preferred music as the medium, some offered it visually and even through combat and similar other skills!

The common factors among those gifted lunatics were platform shoes, sideburns, dog-collars, bell-bottom jeans, wide belts and skimpy leather vests; aviators (solid or gradients), even gonzo glasses. Whether you were a Beatles or a Bruce Lee fan was merely superficial; at heart, you’d be a free soul. That was the charm of the ‘70s.

The watch industry, naturally, couldn’t stay back too far, for too long to match up the styles. This era created some very exquisite designs which, now seem to be making a comeback. One among them is the Hamilton American Classic Pan Europ Automatic.

Ventura associates with Elvis – not Costello – and saw the daylights in 1957. It just doesn’t get into the mid-60s to ‘70s nuttiness. The current Ventura watches – be it the XXL or the Open Heart – are not the original electrical, battery-powered version (i.e. an electrical – not electronic – circuit powered by the battery) albeit way better constructed than before.

A revival from the past

The original Hamilton Pan Europ was introduced in 1971. There’s a chronograph version (re-issued in 2011) and a plain three-hander version (2014) of the same. Both are ‘70s inspired. And no; Hamilton is no way related to the British racing driver, maybe he just likes to wear Hamilton watches. Can’t say with affirmation, though.

The original was one of the very first automatic chronographs. It, too; featured a cushion shaped case like the ones now. It was kind of similar to others; say, the Tag-Heuer Autavia or the Breitling Chrono-Matic in almost every aspect; even the movements, which was a Heuer-Breitling-Hamilton Calibre 11, with 17 jewels and an Incabloc shock-protection system. Alternatively, the Buren caliber.

Our piece of discussion, however; indicates just hours, minutes, seconds, day and date. It comes equipped with a simple but reliable H-30 movement (more about it later) and a rotating bezel with a diver-style minute-track. This can be used as a timer. Be careful if you are reaching out for more than a hundred and a fifty feet under water; after all, it is not a real, full-fledged diving instrument.

With two straps on offer (an extra one thrown in), crisp and strong, the Hamilton Pan Europe is very much of an appreciable piece at a very approachable price point. We’ll check its different components one by one.

The white chapter ring around the dial containing the minutes track. It imparts quite a bit of space to the hour markers. Hands alike, they have been applied with luminous material; however, do not expect Lumibrite like brightness or lasting. Over a few hours, the vivid lume will fade into a dull, sustaining glow which is enough to tell the time from but not read a book.

The lettering on the dial are slender and to an extent, inconspicuous. That helps to keep things from getting loud. The blue/red NATO strap emphasizes upon the 70’s feel and it’s good to see there’s a H-marked steel nib securing the end of the straps. The square rings offer a tight and easy fit of the strap while the sturdy buckle (again marked with Hamilton) and the holes section of the strap is reinforced with a leather strip. The fit and feel of the strap is superb, and perfectly emphasizes the 70’s racing feel. 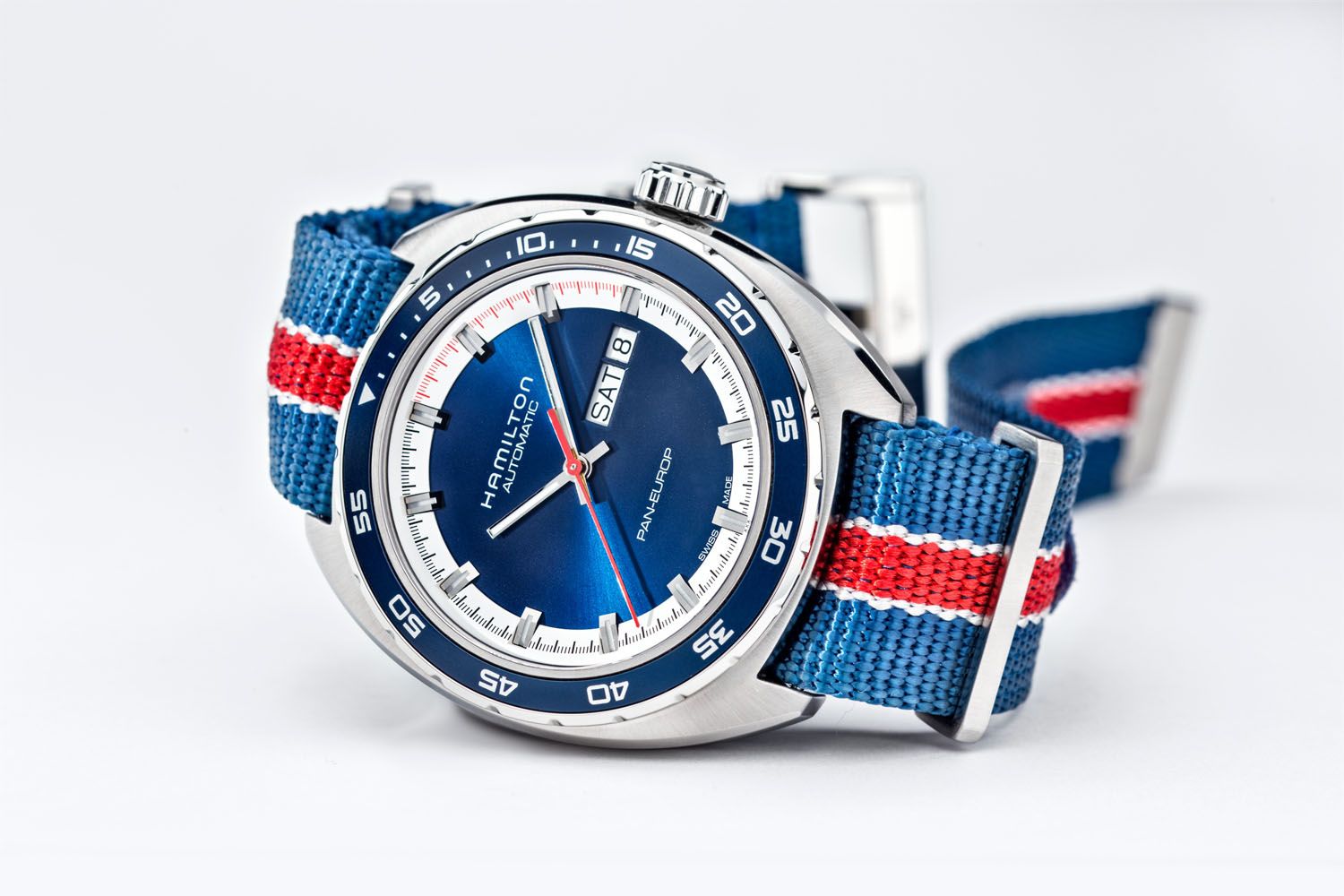 There’s no denying the Hamilton American Classic Pan Europ Automatic gives out an authentic seventies feel loud and clear and there’s also a fair bit of historical inspiration attached to it. The well-executed NATO-strap uplifts the watch many more times than the leather and the watch’s very strong value comes not only from its reliable movement with more than adequate power-reserve but also from the materials used and the way they are used.

However, despite all that, it lacks the superfine refinements of dress watches and appears stocky and burly; but that’s natural, for you’re supposed to have ball with it while moving around in the real world and not always at a banquet.

Keep dropping in to leave your replies below. State for what other reasons you’d like to go for the Pan Europ.