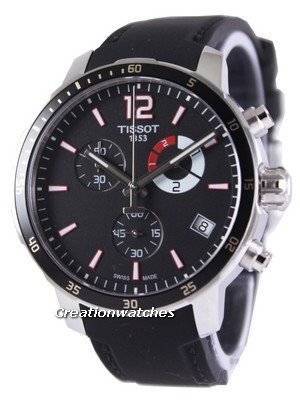 Tissot is a brand most are aware of but not about its variations and Special Editions. It’s only a few of their models that are known worldwide to the general masses; for example, the T-Touch. So models like the Quickster only get recognition among the elite; the time has come to make them known to the rest.

Among the models from 2014, the Quickster is geared toward the action-oriented. The chronograph watch runs on a quartz movement, which is essential, for mechanical complications are more on the heavier side and restrict free movements considerably. Besides, quartz is also less troublesome and can resist the field-related adversities better.

The Quickster gives the Japs a run for their money. So far, we were under the notion that Swiss costs more but at under $500, it’s totally a steal. The ETA G10.211 movement places three eyes on the dial, including the small, seconds-hand and splits every second into its 1/10th.  The fun part is, unlike other seconds-splitting chronographs, it doesn’t whirr around but stays stationary. It indicates the fraction of a second after you stop the chrono or trip the lap timer.

The tachymeter scale is on the bezel and is very legible, just like the dial. The orange colour being responsible, it stands out against the black background while the white markings keep things from turning monotonous. The whole combination results in a relaxed look, which enhances the Quickster’s key function of telling the time. One glance and you can read it without narrowing your eyes.

The sub dials are slightly raised along the edges as well as the inner chapter ring, which adds to a sense of depth. The white date ring makes it more visible, but from an aesthetic point of view, a black ring with white markings would do better. As for the baton hands, they are longer than usual; the minute hand runs all the way to edge of the chapter ring. The strips of lume are decently bright while the central chrono-seconds hand features a T. But the lack of lume on the chrono- features makes them unusable in the dark, unless you have a secondary light source. However, if you try hard, the glowing bits will help.

The leather strap also maintains the black and orange continuity with its orange stitches on black leather. The fine stitch keeps things from getting loud.

The limited edition Quickster Football is different from what we read so far. Introduced in the theme of the 2014 FIFA World Cup, its G10.212 movement is designed specially to time football matches. This includes even the half times and overtimes and it reinforces Tissot’s credibility of being the timekeeper for multiple types of sports over the past decades. The Quickster Football caseback features the texture of the football and has been well-accepted by the young and dynamic sports fans willing to go for a wrist-wear that depicts a certain class.