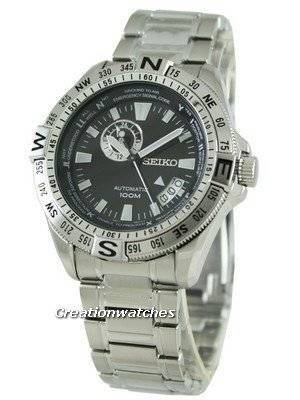 I’m not sure if it’s the Law of Attraction that came into play, but as I strolled lazily across the watch counters inside the departmental store last weekend, something caught my attention. For the last couple of weeks, I was thinking of bringing in a Seiko Superior into my collection and I found this one dead dashing. I couldn’t hold back from holding it with own hands before going searching for it at creation watches, which I found and now (the cut-down prices responsible) waiting its arrival.

However, that’s not what the point is; it is about the wrong information from some of the counter-sales personnel, which is enough to change the decision of a casual wearer.

While checking the Superior, I casually asked the sales girl a bit about the Seiko 5 series – not that because I wanted to buy, but generally – and I concluded I’m a better person to be behind the counter. At least, I take watches passionately and would hate to give out faulty info just to make a sale.

So all that aside, here’s a lowdown on something that I also hold dear, the Seiko 5, so that you stay well informed before you get your hands on one.

The Seiko 5 gets its name not because it was the fifth line of watches from the manufacturer but because it has the following 5 attributes. These are automatics (1), resist water (2), resist shock (3), show the date (4) and the day (5). Now, while these features are part of other Seiko-s as well, but during the time the Seiko 5-s were introduced, these formed parts of watches that were way beyond the reach of a common man’s budget. Seiko 5 opened the door and also held it wide open for days to come.

But here’s the catch. There are SEIKO 5-s in which the Day is omitted. These run on Caliber 7S25 instead of the 7S26; for re-issues, it’s the 7S36 caliber with 23 Jewels (2 more than the 7S26). However, they all beat at 21’600 bph, which is 6 beats per second, as good as Citizen’s Miyota (82xx) but definitely a lot less than ETA; the least it will beat is 8 times a second. All these three form the core of excellent yet inexpensive mechanical watches, so to fight your way in and out of a huge market, this info shall help.