WHICH GENERATION OF ORIENT BAMBINO ARE BETTER? 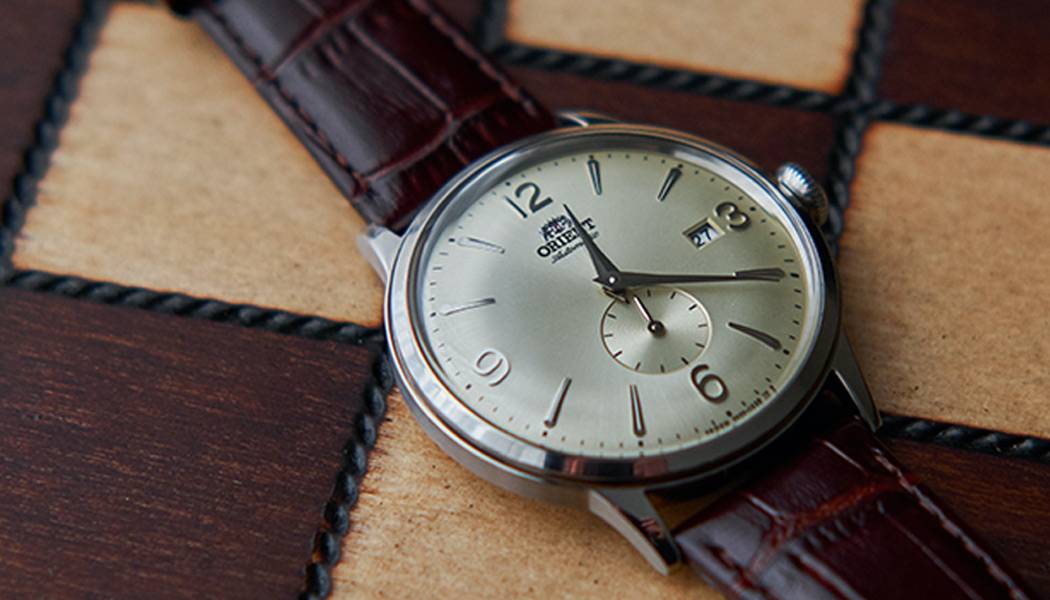 I’m to buy my first significant watch. I graduated last year and I’m about to join my first job in the administrative department of one of the best-known 5 Star hospitality setups in the town. In my best efforts to learn about what watch brands and styles are offered to meet the dressing requirements (and also budget) of someone who will keep running between the front desk and arranging/supervising banquets (and couple more similar things) – at least for the rest of 2022 – I keep returning again and again to the Orient Bambino. This particular series I like for its classic, uncluttered dials and for an absence of today’s uber-muscularity that pushes the proportions overwhelmingly for almost all credible watches everywhere.

I have been able to fall in love with the ORIENT Bambino and while there’s no doubt about it, I’m lost between the ‘Generations’ and the ‘Versions’. I agree that all of them are great watches and they look great too; it’s just that I’m unable to decide which among these would be a better choice – if nothing, then at least – from the technical viewpoints.

Or, is it that my taste is too narrow? In that case, what would be your recommendations? 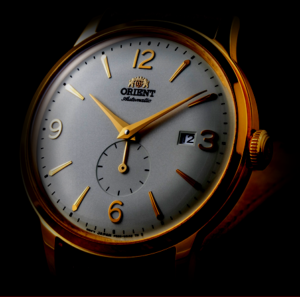 A. Congratulations on your first job, young man and I can’t help but feel carried away with your preferences for the first true watch you are going to wear with your business and smart casual attires.

I’d like to answer you frankly, without prejudice; that appreciation does not seem to be your problem. Instead, it’s about you being bit confused about what truly deserves your appreciation within the Bambino range. I have nothing against believing that you have gone through – in their minutest details – the story of not just Bambino but that of Orient as a whole, so let’s not waste time going over again the collective greatness of the brand and this particular line-up. Let’s focus on the technicalities and a few of the structural aspects instead. Straight away.

Before that, however; I must admit I’m bit surprised with your choice of an essential dressing accessory; especially, for at this tender age, when others are eyeing the snazzy, hefty slabs of steel and/or titanium, you’re settling for value. It gives me the impression that you are very much aware of your preferences – at least on the aesthetic sides – and what you don’t like is too much of a complexity into stuff that’s essential only to satisfy the needs of a situation. You have the powers to appreciate value without the dopamine surge of overspending. That way, the Bambino will be equally comfortable when you are in your living room.

An easy explanation of the Orient generations and versions would be:

Points you must remember are:

Additionally, there are the Small Seconds Bambino and the Open Heart Bambino versions.

To distinguish them readily: 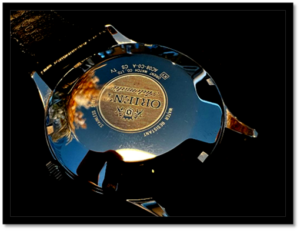 Differences between the Generations

Following all that, now we come to the actual question: “…which among these would be a better choice?”

The Orient Bambino – be it of any generation or version, proves to be elegant timepieces with all the opulence that you can imagine at this price point. But here, we have to look into the key characteristics of each of the versions from the 2nd generation. For, the 1st Gen Bambino will require you to mature a bit more; gain a little more experience out of your job and life before it can make way to your wrist. 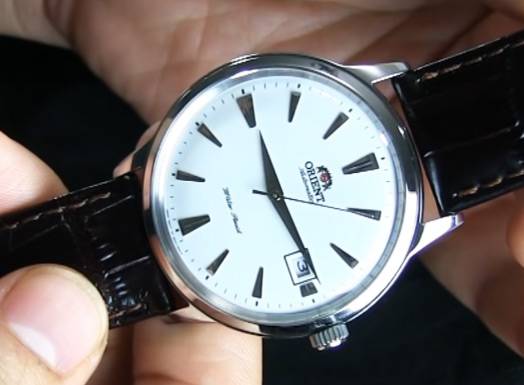 Orient Bambino Version 1: The thick set of rhomboid hour markers bring it a commanding (but not loud) presence, both in black and white dial colours. This will be a good choice when you are behind the front desk. The presence of the date window – despite the flak from conservatie people thinking a dress watch should show nothing but time – is an added privilege for work-related scenarios. There is no denying its usefulness. Better to stick to the white dial/stainless steel combination; the gold tones (yellow/rose) and black dials are fine for the banquet, though. 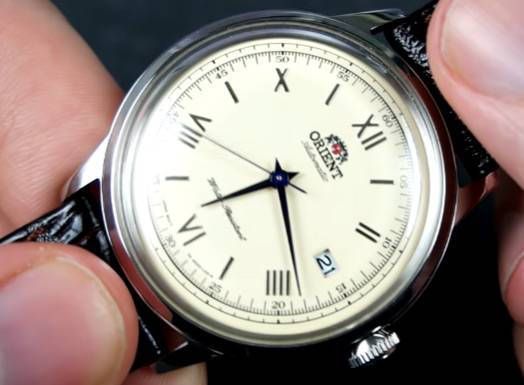 Orient Bambino Version 2: The most old-school of all available 2nd Gen Bambino versions, it has a busier dial than the rest because of a minute-marker train and Roman numeral hour markers. It definitely brings a retro Flieger vibe but not quite for your front desk job. It’s less sleek than what you would need there for its thicker case and a larger, tapered, onion-shaped. In the banquet or at a client meet, however, you may wear the white/steel version with pleasure. 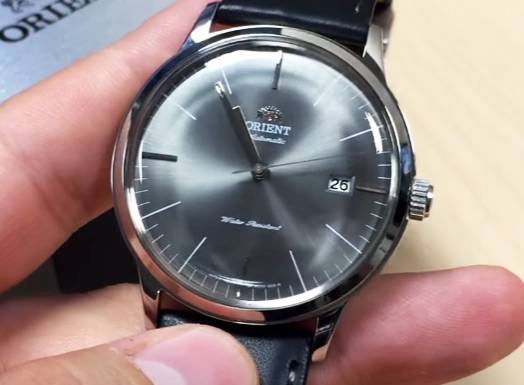 Orient Bambino Version 3: Orient seems to be heavily inspired by the German Bauhaus design concepts and that reflects in the Bambino Version 3. That’s how it came to be known as the Bambino Bauhaus edition; the model that takes minimalism to a whole different level. The absence of any numeral apart from in the tiny date window turns the thin, clean indices and minute markers all the more prominent. Just the quadrant indices are a bit thicker than the rest. They break the monotony that would have otherwise set in and also make the dial more legible.

The square-end hands are very Bauhaus and almost resemble the thicker hour markers, adding more to the parity and harmony of the overall dial design. This one, by far, seems to be the most appropriate piece for you! You also get a blue and a black variant, which are excellent to wear after evening 6. 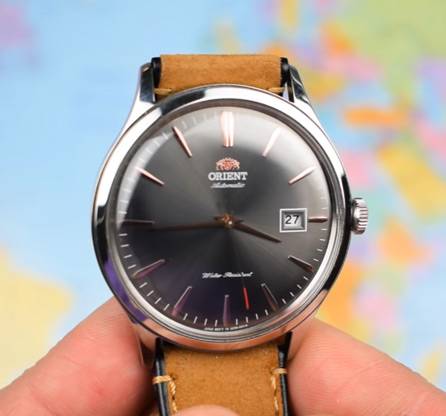 Orient Bambino Version 4: The green dial Orient Bambino Version 4 is fine if you are invited to a dinner and cocktail but go with the blue version only during the evening and the black one when you are supervising an event outdoors, irrespective of the time of the day. The Ver. 4 is mockingly called the Diet Version 1 due to its slimmer hands and markers but a date window identical to that of the Version 1. The slim white borders of the well-rounded, tapered hour markers complement the slim markers. The red-tipped seconds hand is very subtle, yet stands out against the sunburst dials. Classy with enough flair. 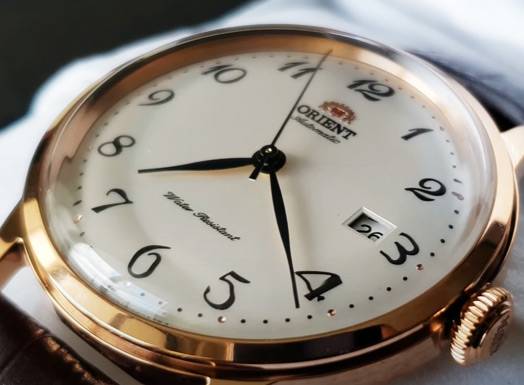 Orient Bambino Version 5: A classy watch because it restrains itself. There’s no going overboard with classic elements to be recognised as a classic; its simplicity in design and form, takes you over by storm. The Japanese brand surprises with its distinct, old-school Version 5 models with a sportier vibe than in the rest of the Bambinos. Good if you can carry it in the office with your given responsibilities. 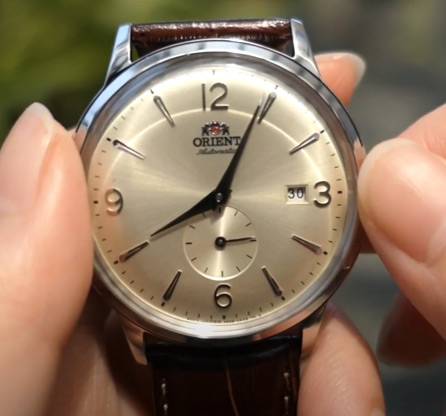 Orient Bambino Small Seconds: Certainly more attractive than the usual Bambino, from either generation. Best for the times when important persons and special guests are around. The Small Seconds version of the Bambino shifts the central sweeping arm within a smaller territory underneath. A clear inspiration from the 5196R – CALATRAVA by Patek Philippe.

It has a lot of similarity to Version 4. The Arabic numerals and the dotted minute train at the edge of the dial you readily come to notice, although upon a fairly close inspection. Now, whether that’s good or bad is entirely up to you to decide.

The see-through case back lets you admire its movement and this is the first Orient Bambino model to showcase this feature. The silver is for special day work; the yellow/rose gold for celebrations and similar events. 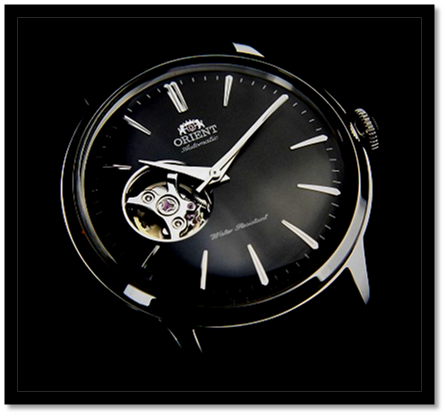 Orient Bambino Open Heart: The boldest spin Orient played on the Bambino series on the dress watch collection. Simple, elegant and stands out with its porthole view of the moving balance wheel and hairspring of the polished calibre F6T22, a movement specifically made to power open heart watches. There’s no date window – there could never be!

The domed dial and crystal creates the classic shape. Wear only if you are invited to a party. It’s not an everyday wear. Indubitably excellent – if two words at all need to be applied!

Lastly, know that with a Bambino, there’s no need to tread with extreme caution. A good return is guaranteed.

You’ve had your fill. Decision should be easy now.

F.A.Q. – EVERYTHING ELSE THAT YOU WANTED TO KNOW ABOUT THE ORIENT BAMBINO WATCHES

In what ways does the world perceive Orient Bambino watches?

An excellent, slightly above ‘entry-level’ mechanical, automatic dress watch line with sports-like durability. They are regarded as the most affordable real watches in the world of horology.

How many variations does Orient Bambino offer in terms of dial design?

There are seven significant variations to the dial designs of the Orient Bambino, spanning over the 1st (Ver. I, II and III) & 2nd (Ver. I, II, III, IV and V) generations. Some also include the Open-Heart and the Small-seconds as a part of the versions while others don’t.

Is there anyone who dislikes the Bambino?

Hardcore traditionalists consider all versions except the Bambino V4 to be larger in dimensions than the orthodox dress watches; also because they exhibit an uncommon lug width (21mm). Their love the Bambino V4 doubles for its 22mm lug width for the ease it brings in finding compatible straps.

What’s the life expectancy of an Orient Bambino watch?

Never open the back – not even for servicing – and it will last for about a decade. You must also not let it run completely out of power; not even for once! Must you have to open the back, get it done at a Seiko authorised service centre and insist upon changing the gasket and if available, additional sealing measures. Following the service, you won’t need to touch the innards for about another 7 to 8 years. The following service will last for about 5 to 7 years and then, once every two years. This way, the life of the Orient Bambino could be stretched to a seriously long time.

This is beneficial for them who want to pass a Bambino down his line as an heirloom. Else, the cost doesn’t let you wait for long towards getting a new, same model or a new, different one.

What makes Orient Bambino so popular?

Orient Bambino watches are high-quality mechanical timepieces at affordable price points. They are a gateway to the Premium segment Swiss-made luxury watches and secure an area of their own inside the horological arena. They are almost – if not entirely – similar to any entry-level Swiss, mechanical automatic, dress watch. The movements are in-house and accurate to within 10 seconds a day on either side while mainstream entry-level Swiss watches use stock movements often going beyond that count. In-house is an extremely rare phenomenon and makes for one of the key reasons behind Orient’s popularity.

Could you dress down an Orient Bambino?

White dial Bambino watches with a brown strap is dressed down. A black strap or a black face is for dressing it up. The dressed down version is – like every other time – more versatile than the dressed-up version.

Keep dropping in to leave your replies below. State which one from the above mentioned you’d like to go for the most and also, for what?