The 6R35 received one more jewel than the 6R15 and took the power reserve to 70 hours. This removes the 6R35 from the list of inexpensive movements. Its use is, therefore; detected at the higher end of midrange Seiko watches. But many people mistook the 6R35 as just a newer version of 6r15, which is again a calibre based on the Seiko mainstay – the 7s26! 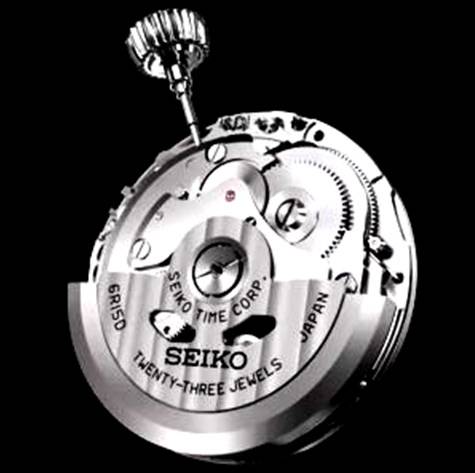 Seiko’s 7S series mechanical movements include not just 7S26 but also the 7S25, 7S35, 7S36 and 7S55. The only common factors that unite the 7S series movements are they all lack hacking and manual winding and all of them use traditional mainsprings.

The 7S26 is around since 1996. This 21-jewel, 21,600 vph (vibrations per hour) movement has a 40-hour power reserve, with a daily accuracy of +20 to +49 seconds. No precision freak is going to be too happy about it; the later movements in this series are far more accurate.

A lot of people wonder about how the 7S26 found its way into some of the military-style Seiko 5 and into the entire SKX line of watches and more specifically, into one of the most ubiquitous diver watches in the world; the SKX009, when it was reintroduced in 1996. From this point, the 7S26 grew into one of the most popular automatic movements in the world, despite its accuracy-related shortcomings.

Now, the 7S series received some major upgrades to become the 6R series. This is why there are so many similarities that they share. 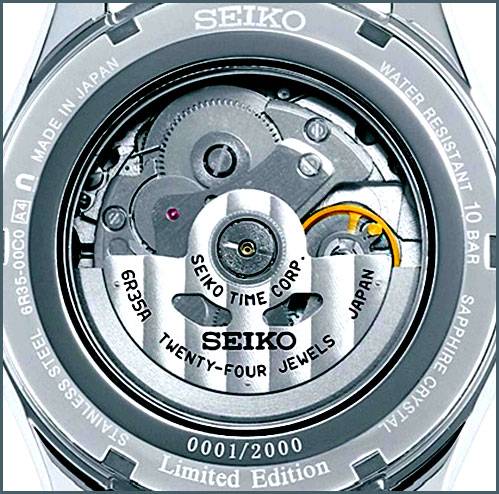 Firstly, the 6R is both hackable and handwind-able; next, it gets a Spron 510 ( cobalt, nickel & molybdenum alloy) mainspring, thus increasing the power reserve by 10 hours flat; from 40 hours to 50 hours. Despite with the same beat rate, the 6R series movements received 2 jewels more than the 7S (increasing the count to 23 from 21) and an improved, daily accuracy rate of +25 to +15 sec. This is debatable since a large number of owners claim the accuracy is way higher than what is mentioned by the manufacturer.

The 6R series of movements power quite a few Seiko models; apart from the Alpinist, they are found powering the Sumo diver watches  Still, it is not a favoured calibre to the Seiko modding community; simply because, Seiko didn’t leave anything more to be desired with these two movements. They provided everything that they could in these, offering enough ground for you to play with the accuracy adjustments. 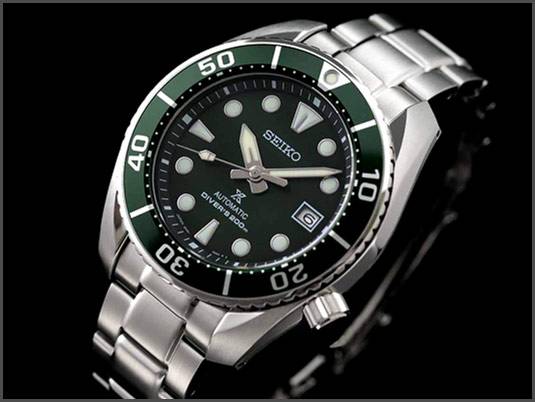 It triggers a natural inquisitiveness regarding the way Seiko stuffed hand-winding and hacking parts in a calibre that was chiefly developed for intense purposes and for   what? Isn’t the extra baggage enough to bring down its robustness; provided there are now more parts that might malfunction if treated as harshly as the 7S26?

To know the answer to this pressing question (and a few more others), we need to get a bit deep into both the 7S and 6R. For according to some, the 6R35 is the hot-rod version of the 7S26!

We look at the bottom plate of the 6R35 first. In watch making, the definitions of top and bottom go reverse. Under this is the meat of the calibre. Turn it over and the top plates show. It resembles that of a 7s26. It makes pretty obvious the 7S and 6R are very closely related. Various other landmarks too, prevail.

The difference starts from the section right above the place where the stem comes into the movement. This is where the redesigned winding mechanism of the 6R35 is at.

Two separate pinions above will surprise anyone who knows about movement mechanisms fairly well. The usual norm for winding pinions is sticking to one. It does the winding, the time setting and changing the date whereas here, Seiko used two separate pinions to bring in manual winding and seconds-hacking features into the

mechanism in the most thoughtful way possible. In the redesigned movement, the  pinion on the left transfers winding rotation to the rocker wheels; it connects to the winding mechanism when the crown is in the first position.

The most important of all upgrades, however; remains the date change mechanism. Seiko builds a bridge here to lift the date-changing train up and take it around to place it in front of the pinion that drives it through multiple, separate wheels without making you feel nothing about it! Taking the bottom plate off reveals the way things are laid for the date feature to work.

To see the second pinion wheel that winds the watch, you got to dig deeper into the mechanism. Remove the top plate (at the back of the movement) to expose the rocking winding system. This is a pretty simple and straight forward move for which Seiko only had to design a new top plate that will hold the rocking. Apart from this, Seiko added a few stem parts to engage with them. But it’s the bridge that takes the cake!

The 6R35 gets a new pinning system for its balance spring. It resembles that of ETA’s and is just as adjustable. This leaves possibilities for the 6R35 to be taken to chronometer grade and is, therefore; pretty much refined a system not to languish and fade just as a successor of the base 7s26.

Taking the balance cock off brings the hacking lever in sight; just above the pallet fork. The balance is stopped by a post sticking up vertically from it when the crown is pulled. Below this are the base 7s26 guts. Pretty much ALL; laid in a very simple and straight forward fashion, much like a 4500 GS calibre but without the complications of extra linkage points.

The stem-end of the hacking lever is a ball that rides through an elongated socket to move the lever in and out towards the balance. Seiko had to machine the plate according to where this hacking lever would go, and how they got it all done i a remarkable feat. They did it without altering any base 7s26 calibre component or their layout. Moreover, they dug a trench (fractions of an mm wide) all the way through the plate with their fine machining skills and equipment.

But wait; where did the calibre 6R15 go? 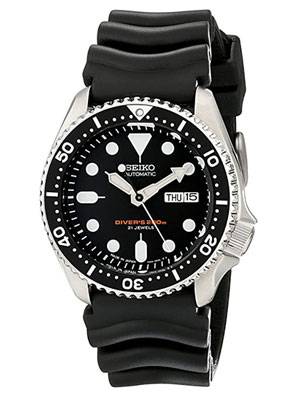 ·  Seiko SKX007 (Cal 7S26): Arguably the most popular watch ever to house the 7S26, the story of the SKX goes beyond its plain, simple, tough diver look or, the Pepsi bezel. The watch meets ISO 6425 standards, which is a valid certification for its diving abilities and also, a reasonable amount of magnetic and shock resistance in and out of water. It is built to survive cringe-worthy impacts and deadly abuses. Seiko’s proprietary Hardlex crystal too adds generously to its overall reputation for its greater toughness and scratch-resistance than ordinary mineral crystals. The lume is incredible for such an inexpensive watch, with a surprising initial brightness that continues over quite a long stretch. 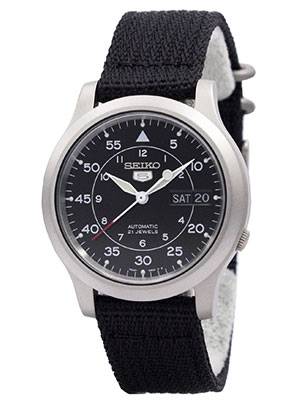 · Seiko 5 Military Automatic (Cal 7S26):  As your first serious watch should be, but without the seriousness! It surpasses the guidelines of mechanical watch ownership and at the same time, is incredibly affordable. Treat it the way as you treat cadets during training; it will still hold dear to its place on your wrist. A top-tier gateway watch expected to be worn all-day, every-day. It’s built for your everyday challenges. 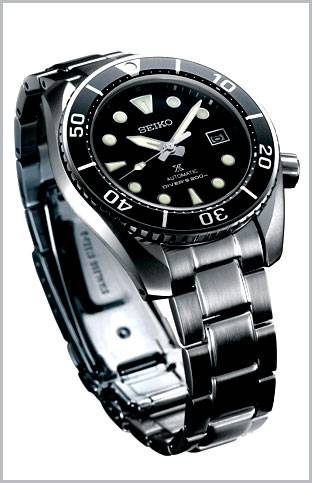 · Seiko Prospex Sumo Automatic Diver (Cal 6R35): The Seiko Sumo is above entry-level; it is where high-end stars from. It is one of the better built Seiko-s; slightly different and more refined to look at since 2019. It’s also a fully in-house built Seiko Prospex, which holds to Seiko’s standards for a professional-grade watch. Alternatively, it’s known as the MM200 (Marinemaster 200) and considered a step that leads to the actual MarineMaster – the MM300! 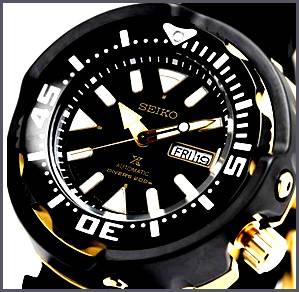 ·  Seiko Prospex Special Edition Automatic Diver(Cal 6R35): The Seiko Prospex special edition is a mid-tier option with a high-end approach. It is a prominent member in the brand’s extensive range of dive watches. Alternatively, you might call it the Prospex Sumo Special Edition – the Sumo nickname following from its massive dimensions. At 50mm, this updated model is a nice change after remaining unaltered for so many years. It’s posited between the cult-favourite Turtle and the premium Marinemaster and it maintains its station well! There is no questioning the performance value of the Sumo Prospex Sp. Ed. It has a defined sense of style that makes them suitable for everything from a business lunch in the city to a weekend vacation. 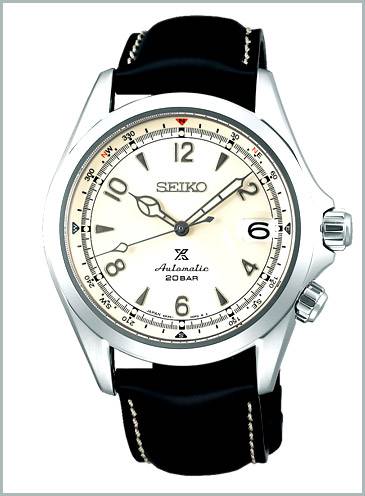 · Seiko Prospex Automatic Alpinist Field Compass(Cal 6R35): The first Alpinist was introduced in 1961 as a reliable timepiece for Japanese sports enthusiasts; especially, the mountain climbers. The re-release occurred in 2006, with pleasant diversities that add to its uniqueness. It is a watch that defies social or dressing boundaries and can be worn in any situation, whether business meetings or a casual date.

The Seiko Prospex Alpinist Sharks Tooth is a purposeful everyday sports watch with some prominent upgrades over the 1961 version. That includes the movement and the open case-back.

The 6r35 was what 7s26 transformed into for all those enhancements that went into it; the obvious one being an addition of hand winding and hacking capabilities. The not so obvious ones were the new materials for balance- and mainspring, which is at par with the upper-mid level ETA movements, if not slightly superior. It provides a much longer power reserve and a much more uniform energy delivery from the mainspring, irrespective of a tight or a slackened coil. Most of these machine-regulated calibres remain functional well over they are expected to run without a service, which equivalently aged ETA movements often don’t match up to.