MK, despite a fashion brand, has stepped up recently and got committed to serious watch-making. The MK Jetmaster is nowhere near those incoherent designs that cast more attention than needed to show it’s indeed mechanical and make the primary function of showing time get lost amidst a flurry of flashy rings, springs and braces.

When MK thought of going skeleton this time, they understood one simple fact. No subpar movement would do. From a horological viewpoint (also a typically mechanical one), MK seems to have done with the banal, relatively unimpressive, inexpensive, battery-powered quartz engines and had to call it a day before opting for a better quest. MK was weary of the typically inexpensive segment named fashion watch and wanted to look bad. It’s no illegitimate wrist-trash this time. MK finally creates something suitable for people with horological and other taste and knowledge.

The money thing doesn’t become a defining factor here. But it’s a fact that those who prefer fashion brands over heritage watches shall also find the Kors Jetmaster an absolute fashion statement. Those trying to get into mechanicals from fashionable quartzes will find the Jetmaster as a foundation to build your future timepiece collection. No, we’ll certainly not consider the Jetmaster as a horological height, but it’s still closer to that height than many of its peers. The journey for going real helped MK to define an own, distinct niche between the two zones. 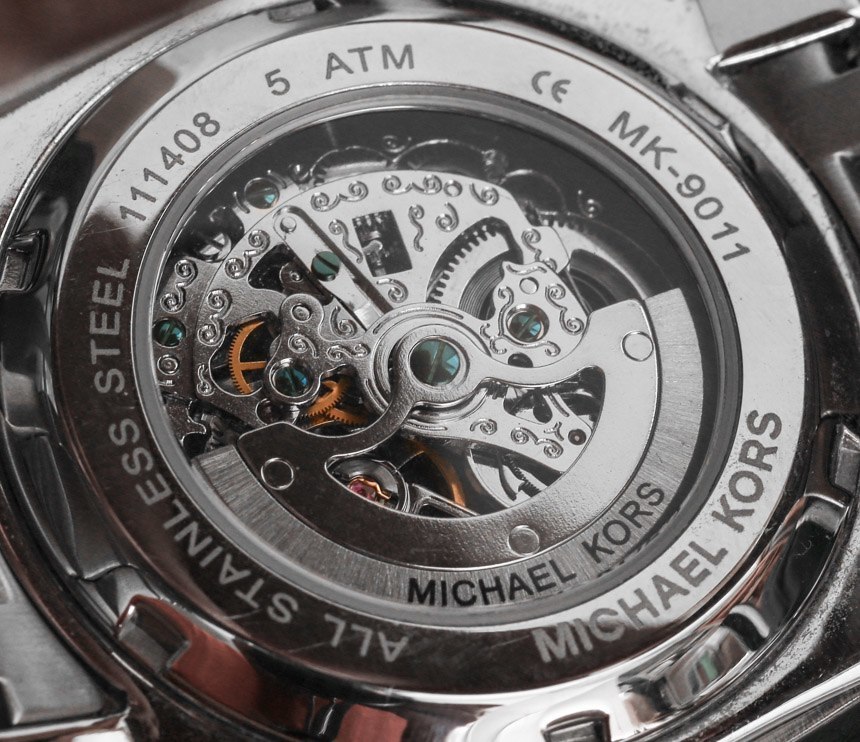 The Jetmaster didn’t walk the known avenue of chronographs. Instead, it puts in options you’ll find more useful in an everyday life. The registers are a bevy of day, date, month, and 24-hour time complications; there’s nothing chrono- among them and all adjusted with the pushers.

MK Jetmaster is perhaps the first one to put these four together on the face of a watch. They make the layout a little too full, but also a little more luxurious.

Looking at the movement, it’s impossible to recognise its Chinese origin unless told beforehand. It’s a very attractive mechanism that shows through the Jetmaster’s exhibition case-back and you can tell there are no merely-painted blue, red or magenta screws. The metal quality is thin, uniform and treated with a good finish.

The Michael Kors Jetmaster gets a variety of cues from other iconic watch models. There’s a bit of Hublot, the symmetrical pile-up as in an Audemars Piguet Grande Complication; chunky links with a brushed-satin finish like the Rolex Oyster Perpetual or the slightly-rounded, TAG look  – all rounded up into one. However, it also takes the bezel’s inspiration from the Seamaster, which it pays homage to. The overall aesthetics balances well an armada of disparate stylistic nous, making the Michael Kors Jetmaster Automatic an interesting watch to wear; at least, till it gets a top-notch Swiss movement inside. Then, it will be a real interesting watch.