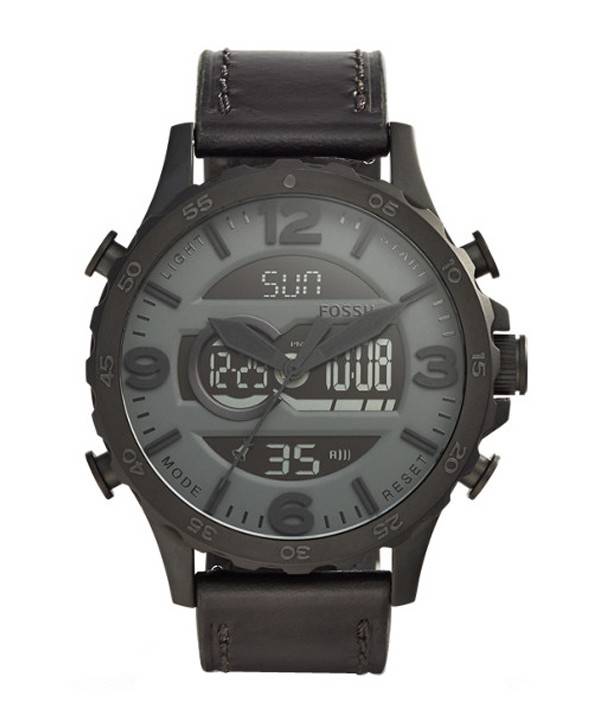 Very few watches are actually capable enough to draw attention from newbie-s and veterans alike; even if they do, you can’t expect them to be at a comfortable price range. Well, let’s say you couldn’t; for now, something sleek yet serious is ready to storm the stage. From the house of Fossil comes the very capable and very solid Nate Ana-Digi to create an impression among those who are inclined towards styles that speak you are ‘ready for action’.

The Nate JR1520 Analog-Digital Watch is outright decked in black/gun-metal finished steel. It’s one feature that tips you about the value you’ll be getting in return. Fossil no more is a brand that creates watches just for fun; the Nate JR1520 Analog-Digital Watch is all about making the right impressions using influences from classic designs while its most notable elements and accents embrace the technologies and shapes of modernity.

In a world where we see analog and digital elements mixed every now and then, the Nate JR1507 Analog-Digital Watch competes with seasoned Japanese behemoths and their decades of experience. Fossil deftly navigates into the domains of hidden expectations and exposes a minefield, materializing an impeccable union between analog and digital components.

Credit goes to Fossil’s design crew members who studied the classical designs well enough to feature them on black steel, a task that’s quite impossible and oftentimes, ends up being just passable. However, at the same time, it greatly qualifies as a timepiece that can very well be a ‘go-to’ accessory – not just for your daily moving around but also for parties (unless a strictly formal one) and even, business meetings. But that’s something very much expected when attitude, calm and cool sensibility are mixed right and mixed to create an impact.

Now, an ana-digi watch is almost always powered by a quartz movement, unless it is a very exotic one with a quartz multifunctional system integrated to a mechanical movement inside. Even if there’s one, it would cost you more than an arm and a leg and it probably wouldn’t be as reliable, or tough or sturdy.

To maintain the price, Fossil decided not to use a typically Japanese or Swiss quartz movement but it’s no cheap, dime-a-dozen, generic movement either. It exhibits the Fossil specs which are far from being shoddy. For this isn’t built by jerry-s.

The Fossil Men’s Nate JR1520; however, is not intended for hardcore sports. While the beach-side should pose no problem, hardcore marine activities might just damage the watch up to quite a bit. No problems on land though; even a round of golf or tennis suits it fine. Even in rain, for its water resistance capability is quite surprising and establishes its position as a versatile watch!