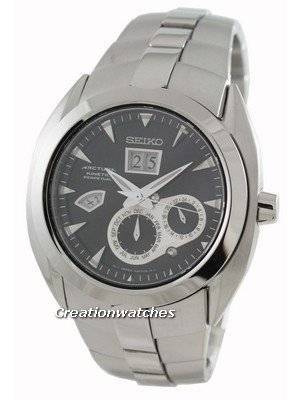 There seems to be two different schools when talking about the Seiko Arctura. Undeniably they are one of the most handsome watches around and I’ve seen people calling them to be the second great gift from Seiko (the first being the Seiko 5), bestowed through the prophet Kintaro Hattori – may he rest in peace. But then again, there’s also the bunch that believes it is too much for a watch – too bulky, too complicated (Is it? Did they even hear of Patek?) and of course, costing too much money.

Now, I’m not trying to tell you what your opinion should be about the Arctura – I’m not someone who likes to shape others thoughts. You know what suits you best; if you think the Premier or the GS is your pick, go ahead – I would love to hear why you chose them over the Arctura. There’s no myth to dispel about my choice and if I still do not agree with you fully, I’ll at least learn something.

I like Arctura for being the signature design for Seiko’s Kinetic technology; its rigid and solid build and the fine aerodynamic design – I prefer calling it curves, though. Any man will drool over sumptuous curves; I’m no exception. To be true, I’m bit more lusty by nature and no, I’m not making an excuse. The curvature stays the central focus of the Arctura and this imparts the real beauty in these wrist-wears.

In my lazy hours, I often lay my Arctura down on my bed (Hey! Wipe that stupid grin off your face; I’m not even trying to sound kinky) and it seems to be a victim of its own beauty. I can’t imagine of greasing up my bobber with the Arctura on (despite it is more than able to take the beatings); here I prefer my Seiko 5 Sports. A couple of scratches and that add character to it but on an Arctura? Don’t we die to see girls with blemish-free skin? It works the same way.

However, come down to performance and you’ll be awe struck with its incredible precision and an understated intelligence, making it a masterpiece in the horologerie arena. A lot of that comes from the refined dial designs, bringing restrained elegance, which some prefer calling a minimalist approach. But a look down under….my my – there’s nothing minimalist about the technology within. If you love Perpetual Calendars and longed to get that from Seiko, the Arctura is a direct answer.

That’s my story and I’m not swaying from it till I find a reason enough. Mine has survived (and survived well) the throw from a toddler and abuses of a Rottie pup – even the stress of skeet shooting more than a couple of times. My final note on the ARCTURA? – It’s unique, timeless and futuristic.