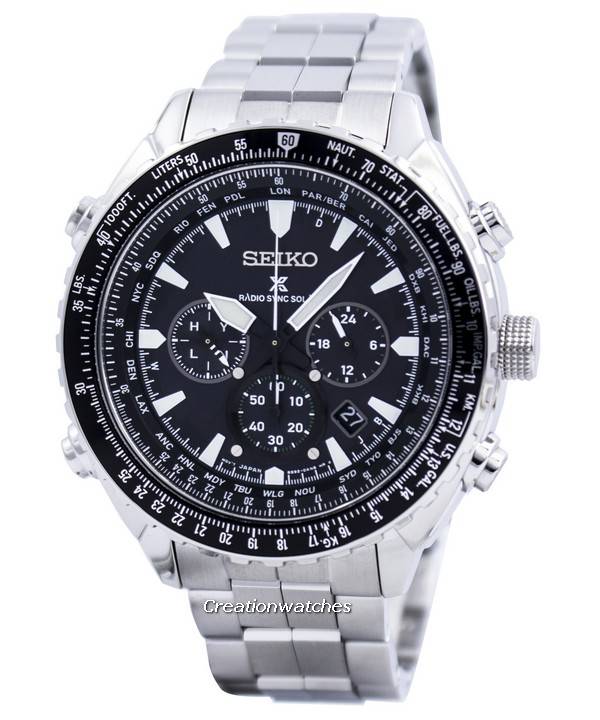 For quite some time, watch nerds all over the world were wondering if it’s at all possible to get everything within a single package. By everything, they meant radio-sync, solar-powered movement, world-time, chronograph and a whiz wheel, which is a rotary slide rule bezel to allow easy calculations and conversions. They can be distance, fuel load, weight or speed, based upon your requirements. Seiko, after a long period of silence, responded back. And the response was enough to blow our respective minds!

So to say, they combined all those aspects to create the most complete traveller’s watch; the Seiko Prospex Radio Sync Solar World Time Chronograph. Whether you’re travelling by flight, sea or land, the new Prospex brings the professional’s precision and reliability without the complexities most fear to stay associated with such watches.

It’s precision all right, but to what extent? We don’t expect you to believe right away; it takes time to digest that it’s going to fluctuate a second every 100,000 years! Maybe your 1333rd successor will have a complaint with this piece, but not you. With the solar power thrown into the mix, it’s not going to stop either, unless you deprive it completely of light.

Are you expecting any of the existing Seiko calibres to be running the new Prospex? Surprise here, too; the 8B92 is an entirely new Radio-Wave calibre that’s more powerful than its predecessors; it is capable of receiving time signals over much wider geographical spans. Its greatly enhanced power to receive signals is a big plus to them in the habit of going places that others avoid; the best part is, auto-syncing occurs thrice a day unlike the previous one time update. Else, sync it at your will; all you’ll need is just pressing a single button. Whichever of the 25 time zones you are in, you got the freedom!

As for the exterior design, it has been tailor made to match the real-life needs of pilots/sailors/cruisers in mind. The edge of the slide rule is designed to facilitate an easy grip while the button tops come with different textures so that you can feel prior to pressing one, thus knowing first which one is it that you are pressing. The feel is different for the stopwatch, the radio sync and the world-time button. The Lumibrite is indeed BRIGHT and lasting while the ARC coated Hardlex crystal ensures very high legibility and you don’t need to look hard for reading the time.

So this time, Seiko brings you something with which you can really challenge the limits professionally or recreationally, on land, in the sky or in the water. The Prospex  has what it takes to go to the extremes! And oh, did we tell you that it’s a splits-second chronograph bringing you an almost mechanical feel?