I have an obsession with ana-digis and ever since Tissot released the T-Touch Expert Solar I’ve lost my sleep over it. But well, before I flip my plastic out, I need to know if it’s going to be a respectable timepiece to wear at corporate set-ups? So far, I’ve worn only the dress-luxury types to work (I’m the senior marketing manager in one of the reputed corporate firms) but now I want to wear what I really like, albeit with a touch of luxury. I can’t really wear the Casio G Shocks at office; they are too big to fit under my shirt. 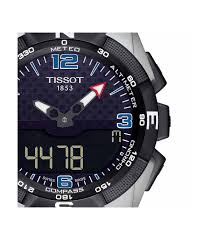 Let’s get to your points one by one. Firstly, calling the T-Touch Expert Solar just a luxury watch will be utterly wrong. It is not a mere luxury timepiece; just taking birth under a Swiss banner doesn’t necessarily make something ‘luxury’. It’s Sports Luxury – the watch to beat; every bit made for the harsh outdoors. You can say your G-Shocks finally got a worthy competitor, which matches up to their functionality and outruns them with its ‘goes everywhere’ style. Yes, it’s good for the office too and a nice match to your touch-activated smartphone or tab, whatever that you must be using. It helps you to maintain parity. Hope that suffices; however, if you need to find out more on the T-Touch Solar Expert, allow me to save your time, energy and bandwidth that you would waste otherwise roaming in the cyberworld.

I guess you are clear on the Solar and the T-Touch parts, so I won’t go that way. Instead, let’s adore its tech-orientation perfectly fitted for the snow, rain and rocky cliffs. Its functions are snappier; its lume brighter and the solar array making for a sharp look. For the money, you’ll get a gadget-laden watch that also updates you on when you need to feed it with light. For you, especially, it comes as a blessing, since most of the times it will remain under your cuffs.

The current Expert is vastly different from its 2013 prototype and the changes did it good. Albeit the overall styling and dial layout remains intact as before, the materials have changed as well as the shape of the hands. Carbon fibre has become almost – well, ubiquitous.

But I’d like to congratulate you again on your choice. The T-Touch Solar Expert is definitely the watch to DIG. Ask me and I’ll speak of its cluster of instrumentation tightly packed into a really neat and lightweight case; of its robustness and definitely, its power to make its own food. I guess you need to interact with clients overseas, so if not for anything else, it’s the world time feature that’s going to help you a lot.