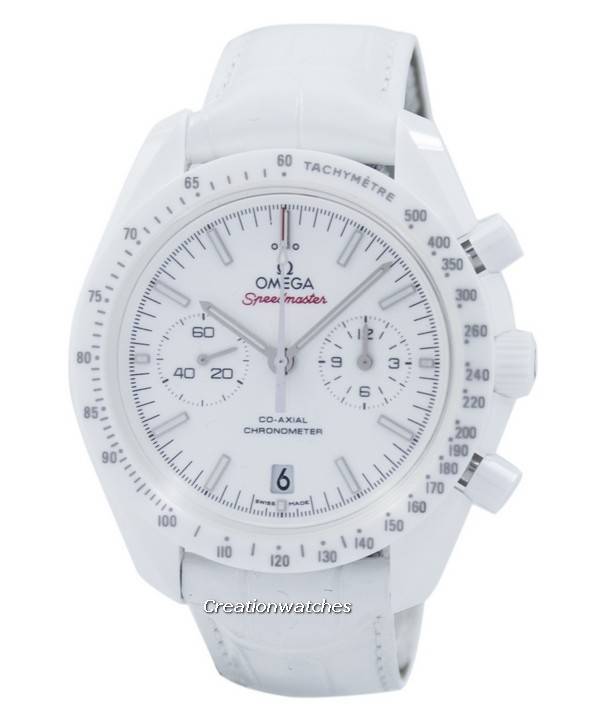 A few days after our entire stock of the Omega Speedmaster-s got exhausted sprang forth this white ceramic block, shaped into an attractive and prominent bezel set upon an equally tough case. This one, as we found out, is named the White Side of the Moon (don’t try to smell any Floyd-rivalry here). It resembles the radiant face of the moon; the one we see.

No, that doesn’t mean it’s as pitted as the Moon-land; quite the contrary, it feels smoother than metal. The use of zirconium oxide ceramic for both the dial and the case gives the white a very subtle glow. Preceded by the original ‘Dark Side of the Moon’ and the ‘Grey Side of the Moon’ Speedmaster, this one is the white version of its predecessors. Built entirely in ceramic just like them, the trend rolls into a new colorway!

At 44.25 mm across, the watch wears fabulously despite sitting high on the wrist (16 mm), for which, the extruding boxed sapphire crystals (top and bottom) are largely responsible. But its redeeming qualities far outweigh this factor.

A symmetrical design, a high-end movement and a rock-solid build are not the only virtuous points about the new White Speedmaster; there’s a zirconium-oxide ceramic dial exhibiting black demarcations, with 18k white gold-hands and indexes filled with white Super-LumiNova. There’s a subtle touch of red at the tip of the chronograph’s central seconds-hand and matte chromium nitride letterings for the tachymeter scale receive a ghosted-appearance on the white, ceramic bezel.

The dial follows the Speedmaster ’57 format and is different from the rest in the clan. The lack of a third counter and a large, very well-readable date window at 6 (white, applied numerals upon black disc) are stark, immediately-noticeable differences; later, the coming together of the chronographs hour and minute indications on the sub-dial at 3. The in-house Calibre 9300 does the trick! 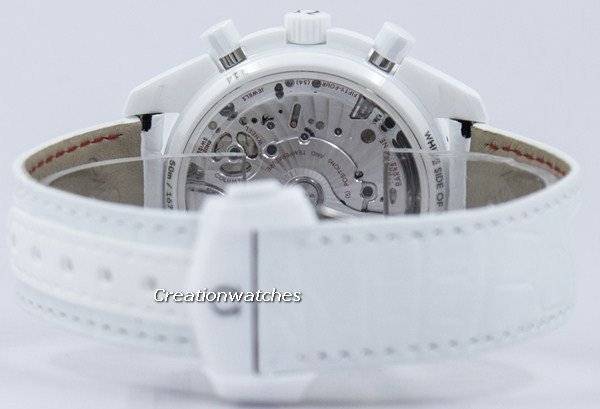 Among decorations, it’s a black balance wheel, a black hairspring and red engravings on bridges and the winding rotor with Geneva stripes (Cotes-de-Arabesque; a form of waves) add to the 9300’s character and recognition.

A meticulous construction – case and constituents/components alike – carved (machined) from a white ceramic block; the Speedmaster has evolved into this fine little babe over the past 50 years. This latest Speedy is a tuned-up, refreshed version of the original Speedmaster. The Professional!