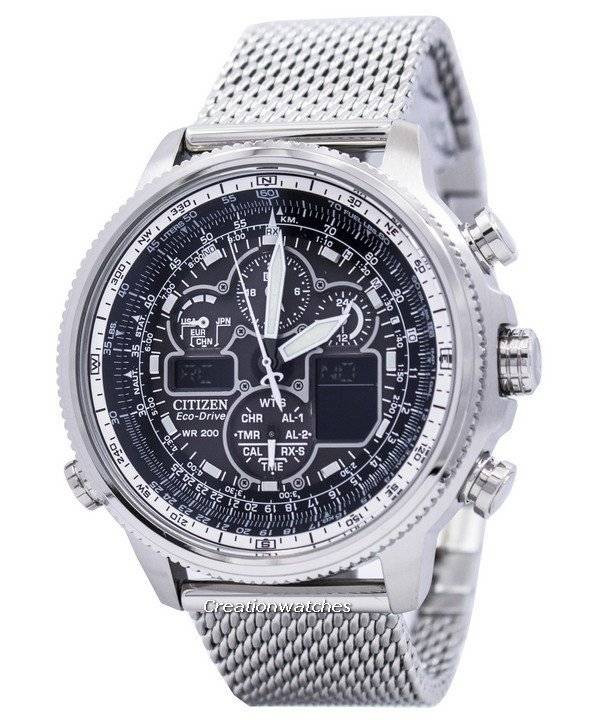 I’m not too savvy with the technical distinction of the Navihawks and the Skyhawks. So I’ll put it simply as the JDMs for the current Promaster Skyhawk get the label Navihawk. Earlier, a lot of people used to say Navihawk is the single LCD (on the right) version and not the current dual-pane models that Citizen sells. I think it’s bigotry. IMHO, the current dual pane exalts the existence of the Navihawk and the Skyhawk; so the Skyhawk is the global version of Navihawk – with me – is an idea that sits better. It’s convenient assuming things that way, for they also share the same module.

However, with JDM, things are better in every aspect and they also cost more. Still, only a handful slip out from the tight networks and are sold for less than $500. With Skyhawks; however, that’s not a problem unless you really mind the sapphire crystal.

Given that it’s a dense, pro-level, tech watch, Citizen’s idea of turning it dressy took the venerable ’Hawk  to a different level altogether.Or, let’s just say it acquired an all-access pass between the boardroom and the ballroom. Everywhere, it will be noticed, envied and admired. But if you don’t understand UTC properly, it will cut the fun down in half. So, here’s a bit on that.

To use UTC, your time zones shall be expressed as offsets (positive or negative) from UTC; to know how, here’s the list. At the westernmost, the time zone is UTC-12 while the easternmost time zone is UTC+14.

Funny and – at the same time – ludicrous as it may seem, with UTC time, you can schedule your journey where you can stay in today  for more than 24 hours. Surely you can’t change the course of events that way (unless it involves you), but moving past into the future without losing the focus on present is only possible with the UTC! Credits go to the Washington Meridian Conference in 1884, which brought together the 27 major seafaring nations and brought orientation and order into time-related madness by setting up 24 time zones.

The meridian (an imaginary great circle on the surface of the earth passing through the north and south poles at right angles to the equator) that runs through Greenwich (a borough of Greater London on the Thames) was fixed as the 0o longitude and the creation of the time-zones occurred. With respect to GMT or Greenwich Mean Time, time-zones change by an hour for every 15o of longitude – minus to the west; plus towards the east.

The 180o longitude (the line directly opposite to the Oo meridian) is the International Date Line. When you jump east of this line, you go back one day; cross it while travelling west and you jump into tomorrow.

GMT was astronomically determined; to perfect it further, there came an atomic time scale in 1972. This is UTC (Universal Time Coordinated) – the time scale controlling international aviation. A UTC pilot’s watch will remember and display home time while tracking the change in time as you cross time zones. With the Citizen Navihawk, you detect time automatically that way in 43 cities spread over the 24 time zones and spot-on accurate because of the atomic synching. Travelling executives or anyone with business in another land, give the Navihawk a try – you’ll forget using Internet to find out your clients’ or partners’ time.