There’s something delighting about the basics. Now, many among you have heard Gonzo speaking the same thing over and over again but don’t flip over when I mention digital this time. By digital, I mean the Casio GD-400 and I like them more due to their very basic colour variation. Greenish, bluish, orange-ish, khaki-ish – every model looked – and looks – good to me. Choosing one felt quite difficult; with the money in hand, I would have gone for them all! But then again, orange and red are my all time favourites; I settled for the GD-400-4. It won’t be long before it makes into my collection and I say this after I played around with it for some time and here is what I think of them.

The GD-400 line-up is a reminiscent of the past. Anyone who had the hots for the G-Lide DW surf models (that was back in 1997, near about 20 years from now) will get it in no time; for those who are not as familiar, they were the biggies of the era. Casio beefed up the said biggies up last year (2014) – though not very much – but it was more than enough to fit the beefed biggies into the G-Shock X-Large line. However, surprisingly, the difference in the sizes is not readily detectable, so as afraid as I am about tying hockey pucks on my wrist, it didn’t bring up any issue. Moreover, I’m sure it is not going to look big on any wrist. 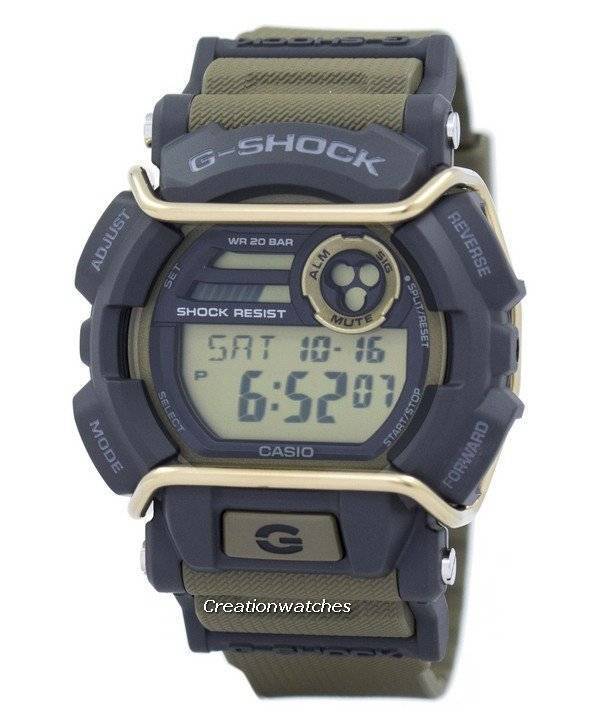 Casio released the GD-400 as basic G-Shock models whereas; they should have tried putting them in the G-Lide series itself. Just replacing the single piece resin strap (it went through the strap adapters) with a two piece style (and not through adapters) that runs through extra attachments (this retains the old look) and prevents the play straps are often accused for. The whole thing is a tight, strong setup. That they add to the overall cosmetic appeal is secondary, but you can’t deny it does bring on a tough look. But what’s even more striking is the strap is much more flexible than the Glides’.

The GD-400 series got something the DW-s didn’t; it’s the face protector or the bull-bars. This is important! It is thick-gauge steel in a perfectly symmetric shape, embracing almost the entire case and its appendages and staying perfectly tight in place. The display is laid out in a much rectified manner; there are two ‘Graphic Areas’ (showing the seconds and the 10 seconds). The big eye shows the state of the functions (alarm/hourly chime/mute) and being bigger in overall size, the display turned bigger too. So everything just turned bigger and obviously, more visible, including the Countdown Timer and the Chronograph. I’ve given in to travelling this year and though I won’t be crossing time zones that often, but it feels nice to boast about 4 at a time on your wrist. The Flash Alert is also a nice way to irritate the one sitting beside you and well, is a non-offensive way to answer if the person beside you creates a fuss.

Great models that look modern without losing their old charm and sturdier than before!