Hamilton – Elvis Presley relation looks pretty much the same however, there’s a kind of an “organic “difference. Hamilton did not design and produce a watch for Elvis. In fact, Elvis randomly chose the Hamilton Ventura and wore it during his blockbuster motion picture – Blue Hawaii in 1961. Hamilton, one of the leading American watch manufacturers, did not possibly forecast this current situation about Ventura however; the brand did not remain unresponsive to that unique watch which made them own one of the most iconic designs in the watch industry. The models in the up to date Ventura collection look different from the original model worn by the “King “however, the DNA can easily be seen in the watches. After almost 55 years, Ventura is still a unique watch with its asymmetrical triangle shaped case. 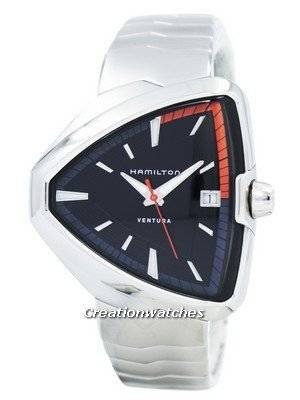 One of the most original yet extravagant timepieces ever conceived, this year it ideally celebrates the 80 th anniversary of its ambassador, Elvis Presley, The Hamilton Ventura Elvis80 Quartz H24551131 Unisex Watch bears remarkable differences compared to the version in 1961. The larger case is the most significant one. A considerable thickness that makes it resembles a classic three-hand timepiece, and a bold personality that is clearly aimed at a bold persona. The main novelty is the adoption of an integrated stainless steel bracelet, designed to blend into the Stainless Steel Case, equipped with the F06.111 caliber, made exclusively for Quartz Movement. The timepiece comes with a Black Dial and sports a flash of color on the dial – orange integer’s mark out the minutes between 12 and 3 o’clock, coordinating nicely with a second’s hand and a date display rest on the 3 o’clock position. The dial is protected with a Scratch Resistant Sapphire Crystal and it also features Luminous Hands and Markers with a 50 MM Water Resistance.

The watch looks quite good on the wrist. The almost all black design prevents the beautiful lines of the case to be seen instantly but, it will not hurt the eye-catcher design of the watch at all. Hamilton Ventura is a must for every collection with its iconic design and ageless place in pop culture, The Ventura was, to sum up, a clear homage to the Elvis Presley one; above all the Hamilton Ventura Elvis80 preserves the spirit of that watch.