The Hamilton Timepieces takes Hamilton back to its roots when Hamilton was chosen for its unrivaled reliability and style. The Ventura is a very special model in Hamilton’s history. It is among the most iconic wrist watches ever designed. The original models were tuning fork based watches with electronic movements. These were the predecessors of quartz movements. On and off, Ventura models have been in the Hamilton collection for years. 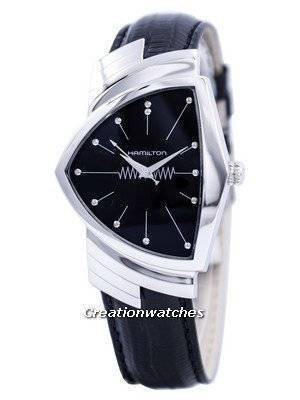 With brands scrabbling for innovative case silhouettes to set them apart from the crowd, the Hamilton Ventura Quartz H24411732 Men’s Watch with its asymmetric triangular case, seems almost like the designers of the time activated ‘cheat mode’ before rolling it out into the market. It shouldn’t be so cool. It shouldn’t be so identifiable more than half a century on, but because it broke the mould so startlingly, it is hard to do anything remotely similar without people comparing it to the Hamilton Ventura. And so, with the perfectly timed release of what was to become a classic, Hamilton somewhat sewed-up that corner of the market.

The Black Dial is interesting yet legible. The entire thing looks like a swoopy spaceship on your wrist. The watch is water resistant to 50 meters and very legible thanks to the large, Mineral Crystal that adds to this timepiece’s eye-catching appearance. The Stainless Steel Case fastened with the Black Leather Strap and with Silver Tone Hands and Dot Hour Markers gives the watch a variant look. The watch runs on a Caliber 955.412 with a Quartz Movement. It has Pull/Push Crown and a Deployment Clasp to protect it around wrist. It carries a Solid Case Back.

Add into the mix that you’re getting a slice of history when you strap one of these Ventura onto your wrist, and the price seems eminently reasonable. Sure, in terms of performance and complication, it is better than one can found in this bracket. The Hamilton Ventura styling gives it that style which makes it more likely to hold its value in years to come.