Watches are no longer considered as just another instrument that helps you tell time. They are considered as a popular fashion accessory, a one without which, a wardrobe is incomplete. If you are on the lookout for a watch that spells style, then opt for Seiko. Seiko has a large range of impressive casual watches that can be worn on a daily basis. Now Seiko produces one of the beautiful watch and named it Seiko Automatic 100M SRP705K1 SRP705K Men’s Watch. It can be wear at causal dress as well as formal dress. To describe accurately a Seiko automatic, let it suffice to say it’s a reliable and inexpensive watch built for daily use and built to appear after years of usage as good as it was on day one. That makes it a significant timepiece; also in terms of performance and reliability. 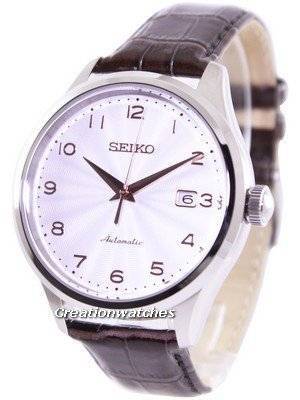 This Seiko SRP705K1 Men’s Watch has several features that make the watch more special. It has Stainless Steel Case with Hardlex Crystal. The Leather Strap that is used in the watch, due to this you can wear it at any formal dress. The watch having White Dial which makes the watch more attractive. The movement that is used in the watch is Automatic Movement. This Men’ s watch having 100M Water Resistance, so it has Push Pull Crown. This Men’s watch having Caliber 4R35. This all features makes the watch more special. Approximate Case Diameter of Seiko Automatic Men’s Watch is 42mm and approximate Case Thickness is 13mm. After wearing this watch, you can count on eye-catching wonder that manages to capture the qualities and functionality, ensuring that every time you lift your sleeve, the compliments and admiration will flow.