The company Seiko is the most illustrious watch Producer Company which produces the mechanical and kinetic watches in varying prices. There are several brands are designed by Seiko. People have their trust in this name and they buy the watch without any hesitation and Seiko watches introduces the innovative technology, which works with the solar power and named it Seiko Solar Chronograph SSC247P1 SSC247P SSC247 Men’s Watch. Seiko watches launched the Solar technology in 1977 for first time. By replacing the traditional battery usage this Seiko solar contributed to the cause of a healthier planet. This Seiko Solar Chronograph Men’s Watch is one of the best and established timepieces available today. Seiko brand has been pioneer of innovation and style since the beginning. 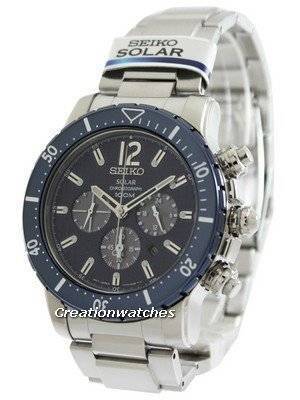 This Seiko Solar watch having several features which make the watch different from other. This Seiko Men’s watch having Stainless Steel Case and Stainless Steel Bracelet. As this watch having Solar Powered, therefore we don’t need to change the battery of this watch long time and saves your pocket money. Also this watch is charged by both natural and artificial light or in deficient light it can works very well. It having blue dial which makes the watch more attractive. The Caliber used in this watch is V175. It having Folding Clasp With Push Button Release and also Screwed Caseback. One of the important feature of the watch is it has Luminous Hands and Markers which makes it also very easy to read in dark. The Water Resistance for this watch is 100m. Also the approximate Case Diameter is 44.7mm and approximate Case Thickness is 13mm. This watch is really impressive in wearing having the ability to attract people in crowed.